Reality is a matter of perception

When now does start for you

Since a kid I loved Kazantzakis and Siddhartha. Mathematics was my passion and at the age of 18 I was admitted in the Mathematics School of the Aristotle University of Thessaloniki. I started my professional career as an IT specialist when I was still a student in order to be able to pay my rent and bills. I only had my grandfather’s Nikos, support. It was the era of the .com boom and by 2001 I shifted my focus to Project Management and Business Development. At the same time I received my Bachelor in Mathematics and a Diploma in International Business in Pen. In 2002 I co-founded my first company – Apogee – delivering projects and products to various European countries and the USA and in 2004 I received my MBA at Sheffield University.

I worked as director, team leader and project manager in international companies, governmental agencies as well as various institutes and organizations before founding in 2011 my second company – ENKI Tech – in Santa Monica US. Some of my more memorable projects were for the United Nations, the European Parliament and Commission the European Centre for Disease Prevention and Control, and the North Sea Region Programme.

I have been director, team leader and project manager in international companies, various institutes and organizations, and have undertaken projects for governmental agencies. Indicatively:

Currently, I am the Managing Director of Apogee.gr and President of ENKI Tech. 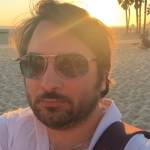 There’s always a ☀️ behind the ☁️. Keep

❤️ @europeanparliament #EU to the next level!

if you add a little to a little, and you continue doing that, soon the little will be much... each effort brings us closer to what we consider as success. The only way is to continue!

We all miss #travel. For sure I do miss a lot #london and the @britishmuseum with its magnificent collections of history, #culture, and #art!

How would be the day you wake and it would be all peace and freedom without separatism? We can create a better world! #LosAngeles #business

Reality is a matter of perception

When now does start for you